Waterloo, NY –  On a blustery cold morning last week, over 50 people gathered on the banks of the Cayuga-Seneca canal to celebrate the rebirth of the Waterloo Hydroelectric Project.  First commissioned in 1915, the project has faithfully powered the Finger Lakes Region for over a century bearing witness to major local, national and international historic events.  Time had taken its toll and it was in need of repair when Gravity Renewables, a leading national owner and operator of small hydro projects, acquired the two megawatt (MW) facility, and its 8 MW sister project in Seneca Falls, in the summer of 2016.

Gravity has been able to make the investments needed to restore the Waterloo project to its full potential thanks to a partnership with Tompkins County.  Through a program facilitated by the Municipal Electric & Gas Alliance (MEGA) and the New York State Association of Counties (NYSAC), Tompkins County entered into a power purchase agreement to cover the electric needs of its government buildings.

At the Re-Dedication ceremony, representatives of the partnership lauded the innovative arrangement that has resulted in more green power for the state and the restoration of an historical powerhouse.   With a nod to Waterloo’s distinction as the birthplace of Memorial Day, the event opened with the pledge of allegiance followed by a Certificate of Congratulations from Senator Pam Helming’s office, presented by Joshua Garnish, Community & Constituent Affairs Assistant.

Ted Rose, Chief Executive Office of Gravity thanked local officials, Tompkins County, MEGA and NYSAC for their vision and commitment to the project, saying “The partnership is directly responsible for over half a million-dollar investment in the facility,” adding lightly that “Gravity’s three full-time operators and many local subcontractors can attest to the fact that they have been busy.”

Mike Stamm, Chairman of the Board of Directors for MEGA, recognized Tompkins County and Gravity for pioneering the policy mechanism known as remote net metering for hydropower transactions.

MaryEllen Odell, President of NYSAC, pointed out that the partnership stands as an example for how “counties and municipalities can together with the business community to meet energy needs in a way that is both lowers taxpayer costs and is helps our environment.”

Chair of the Tompkins County Legislature, Martha Robertson, noted that the partnership has exceeded all expectations.  “The Waterloo hydroelectric project met 79% of Tompkins County power needs last year, far more than we originally anticipated,” Robertson noted.  “We are proud to be a leader on powering our facilities with clean power that is providing economic benefit for our County and the region as a whole.”  Robertson was joined by many County colleagues including current legislators Anna Kelles, David McKenna, Dan Klein, Leslyn McBean-Claiborne, Anne Korman, Henry Granison, Deborah Dawson, Amanda Champion and former legislators Dooley Kiefer and Jim Dennis.

Each of the presenters referenced the indefatigable commitment and vision of Stu Stein, architect of the partnership and mechanism that led to the day’s success.  He passed before he could see the fruits of his efforts, said Ted Rose, but have no doubt “Stu was a person who saw the world as it could be, and we are here today because of him.”

Members of Stein’s family, including his wife, Sandy, joined his many long-time colleagues and friends from throughout the state to witness the dedication of the Waterloo powerhouse as the Stu Stein Powerhouse.  Barbara Blanchard, Customer Relations Manager for MEGA, Vice Chair of The Erie Canalway National Heritage Corridor Commission and dear friend of Stu Stein’s gave a moving talk that reflected on his ability to see opportunity where others saw uncertainty.  “When I went to Stu with what I had learned about electricity deregulation, he could have said, ‘let’s see how it works out before we do anything’”, said Blanchard.  “Instead he said ‘let’s see how we can create value for counties while improving the environment.’ Our world is a better place because of him.”

In recognition of Stu Stein’s contributions, a plaque will reside at the Waterloo powerhouse that reads, “The Waterloo Hydroelectric Powerhouse is dedicated to Stu Stein in recognition of his vision and leadership in rejuvenating this and other historic small hydropower projects so that they can cleanly power New York’s future. The Erie Canal Heritage Corridor Commission also recognized Stein in a proclamation that recognized that “Mr. Stein’s interest in and commitment to the Canal and the work of the Commission is well known and greatly admired, and his influence still felt today.”  Full text of the proclamation is below.

Representatives from Seneca County, Tompkins County, MEGA, NYSAC, Gravity, neighbors and local community organizations like the Seneca Lake Pure Waters Association, followed the Re-Dedication ceremony with a tour of the Waterloo plant.  The tour highlighted how recent upgrades to the facility’s trash rake, turbines and physical structure are important not only to increased clean generation, but also to managing water levels for both the NY State Canal Corporation and Seneca Lake. 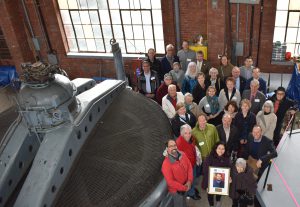 Representatives from Gravity Renewables, Tompkins County, the Municipal Gas & Electricity Alliance, the NY State Association of Counties gathered to Re-Dedicate the Waterloo Hydroelectric Project and rename its powerhouse in honor of Stu Stein.  Stein’s wife and daughter showcase the plaque that describes his work as an early clean energy advocate.

Whereas, Stuart Stein was a founding Commissioner of the Erie Canalway National Heritage Corridor, established by the U.S. Congress in the year 2000 to recognize the national significance of New York State’s Canals and their historic impact; and

Whereas, Mr. Stein’s interest in and commitment to the Canal and the work of the Commission is well known and greatly admired, and his influence still felt today; and

Whereas, the Municipal Electric and Gas Alliance, Inc., MEGA, of which Stu was a founding father, has been instrumental in the development of a sustainable energy program focused on rejuvenation and return to positive purpose for small hydropower plants, of which there are more than twenty-five on the Canal system, and

Whereas such a facility – the Waterloo Hydroelectric Station, first commissioned in 1916, during the construction period of the NYS Barge Canal, is being re-dedicated and returned to active service under MEGA’s Renewable Energy Program in partnership with Tompkins County and Gravity Renewables; and

Whereas, the Rededication Ceremony will showcase the improvements at the site and honor the late Stu Stein, for his part in the revitalization of this important resource on the NYS Barge Canal, now designated a National Historic Landmark by the U.S. Department of Interior;

Gravity Renewables is a leading national owner, operator and developer of small hydroelectric power plants. Small hydropower provides predictable, reliable, affordable clean energy that’s locally produced. By making a long-term commitment to these neighborhood facilities, Gravity restores and conserves important historical sites, employs local operators and promotes educational and recreational opportunities in the communities it serves. Gravity currently has more than 50 MW of hydroelectric projects operating and under development across the country.  For more information, please visit www.gravityrenewables.com or contact us at 303.440.3378. Follow Gravity Renewables on Twitter or Facebook.

Tompkins County was founded in 1817. Since 1970, it has operated under a County Charter, with a legislature-administrator form of government. Located within Tompkins County are the City of Ithaca; the Towns of Ithaca, Caroline, Danby, Dryden, Enfield, Groton, Lansing, Newfield, and Ulysses; and the Villages of Cayuga Heights, Dryden, Freeville, Groton, Lansing, and Trumansburg.  For more information, please visit www.tompkinscountyny.gov.

About the Municipal Electric and Gas Alliance

The Municipal Electric and Gas Alliance (MEGA) is an aggregator of electricity, natural gas and renewable power. MEGA’s primary objective is to achieve the most competitive prices for electricity and natural gas for its members in order to minimize the cost of energy.

Formally established in 2001, but initiated in 1998, MEGA is a Local Development Corporation that serves local governments and affiliated entities by group purchasing of electricity, natural gas and other energy products and services. It presently serves more than 30 county governments and more than 250 municipalities, including many school districts. For more information, please visit. www.megaenergy.org.

About the New York State Association of Counties

York State Association of Counties’ mission is to represent, educate and advocate for New York’s counties and the thousands of elected and appointed county officials who serve the public.  As the voice of county leaders throughout New York State, NYSAC is steadfast in communicating the needs and recommendations of our county officials to State lawmakers. Local government is at the heart of New York State, and NYSAC is proud to represent the counties and their elected and appointed officials throughout New York. For more information, please visit www.nysac.org.